Sinterklaas is a great generous person that visits Holland every year. Children love him, because he gives many presents and… quite often he gives presents to adults too. But… there are 7 things that you need to understand about Sinterklaas and then … great stuff can come your way!

Yes… many people mix them up all the time…  Sinterklaas and Santa Claus have many things in common. They are both quite old, they both have a long beard, they both walk around in red clothes and in they hand out many presents, especially to children. But… the differences are very clear!

First of all, Sinterklaas does not particularly like snow, he prefers sun instead. That is why Sinterklaas lives in Spain and not on the North Pole. 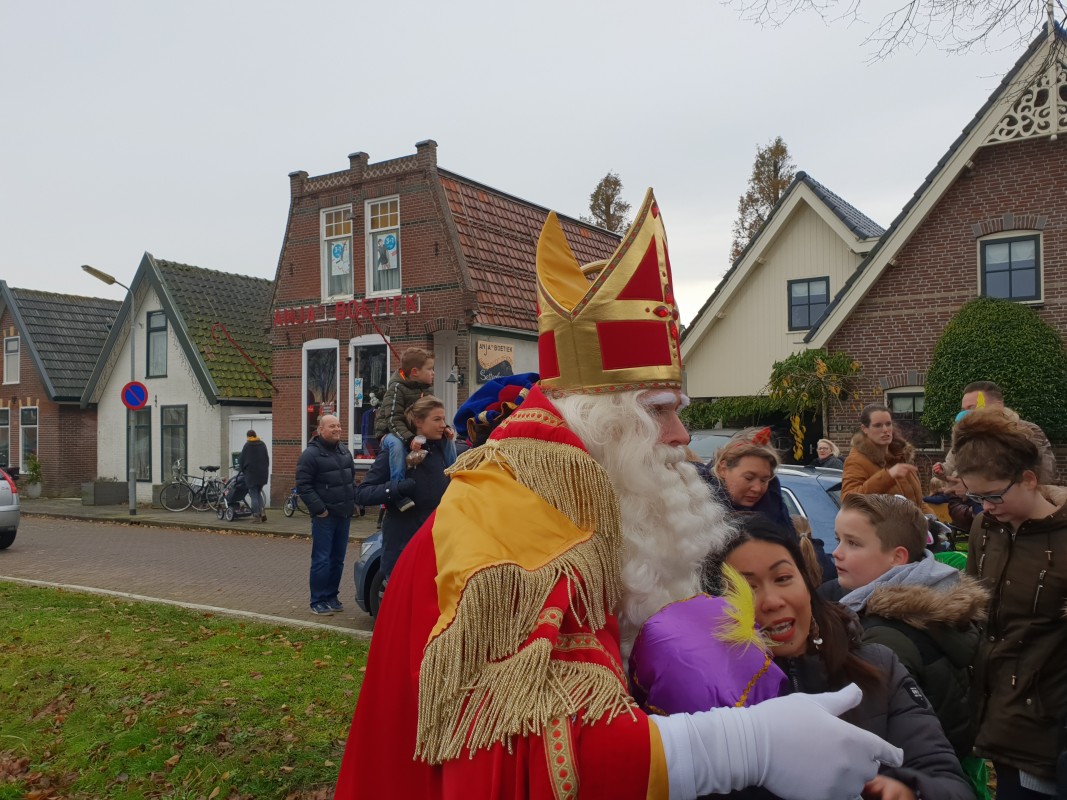 Sint has a very special relation with people in Holland 🙂

Both Sinterklaas and Santa Claus master somehow the impressive art of multilocation. They can show up in many different places at the same time. But… for some reason, it seems that Sinterklaas chooses to be active on a smaller scale. He mainly visits Holland and Belgium, which is a weird thing by itself. Although Sinterklaas speaks fluent Spanish, it turns out that for some mysterious  reason,  he likes Dutch speaking people a lot more…

As you probably know, Sinterklaas does not give presents to everyone. First of all, you have to deserve them and if you are naughty, then you are out! Probably he tried to find nice and well behaved children in Spain – which is his home country – first, but then he had to travel further and further, until he reached Belgium. Holland is also his favourite country and this is why he is only active in these two countries…  Obviously these two countries have nice people! 🙂

Another important thing to realize is that Sinterklaas – unlike Santa Claus – has a very specific sense of humor. When he gives you a present, he loves to write sarcastic little poems at the same time. Here is a kind of poem that you could expect: Sint found out that you always show up late, even for an important date. His warning is that next year it should be better, but for now enjoy this choclate letter…

Can you see? When he writes his little poems, he loves to criticize you a bit, but… in most cases you’ll read at the end of your poem that you still get a present. The message is clear. Sinterklaas loves imperfect people. You’ll still get your present if you have some flaws, but… Sinterklaas loves to poke fun at you!

2 You can honor both Sinterklaas and Santa Claus, but make sure that you do this…

As you know, both Sinterklaas and Santa Claus give presents. Therefore, if you have a very Dutch mind, you could ask yourself: what happens if I worship both of them? The answer will please you…. If you do, you could get more presents during multiple times!

Normally with many religions, you are only allowed to honor one God. But… the great thing is that Sinterklaas is not jealous at all! If you like, you can also honor Santa Claus and sing songs for him as well. But… there is one thing that you must do and it is a matter of courtesy.. Make sure that you wait until Sinterklaas has officially  left the country, which will be on the 6th of Dec. Once Sinterklaas is on his steamboat to Spain again, you can honor whoever you want!

It is of course certain that Sinterklaas and Santa Claus know each other and reportedly they also love to hang out together now and then. But what really happens between these two men has always remained a huge mystery. One could imagine that one day they would share their information systems together… Sinterklaas has a special book that keeps track of the wishes and desires of many people in Belgium and The Netherlands. Although it is a very old book, it has a lot of accurate information and many times, the book of Sinterklaas still outsmarts Facebook! Maybe in the future, Sinterklaas and Santa Claus will integrate their information systems…

The good news is that  even though Sinterklaas knows a lot about you, privacy is very important for him.  He would never share your personal information with companies or governments. In this sense, he would be a great example for Mark Zuckerberg!

3 Shoe setting is a skill by itself

If you say in Dutch: ik zet mijn schoen, it literally means I set my shoe. You leave your shoe for the night in a place in your house where it is clearly visible. If you like,  you can also add a personal letter and you can feel free to mention certain wishes.

Of course there are a couple of simple principles that you need to respect. First of all make sure that your shoes are clean and that they don’t stink! Do not keep your dirty socks in that shoe that you use for getting the attention of Sinterklaas! Make sure that you only use one pair of shoes at the time. Don’t line up 20  different shoes, because Sinterklaas is not going to fill them! And of course… your shoe should have a normal size!

If you think that this is the ideal shoe for receiving presents, then think again!

It is always good to start to ask for little things first. Ask for een chocoladeletter first and then when you get them, show some gratitude. Sinterklaas tends to start giving you smaller presents first and will see how you react. The more positive you are, the higher the chance that he will also give you bigger and more expensive presents! 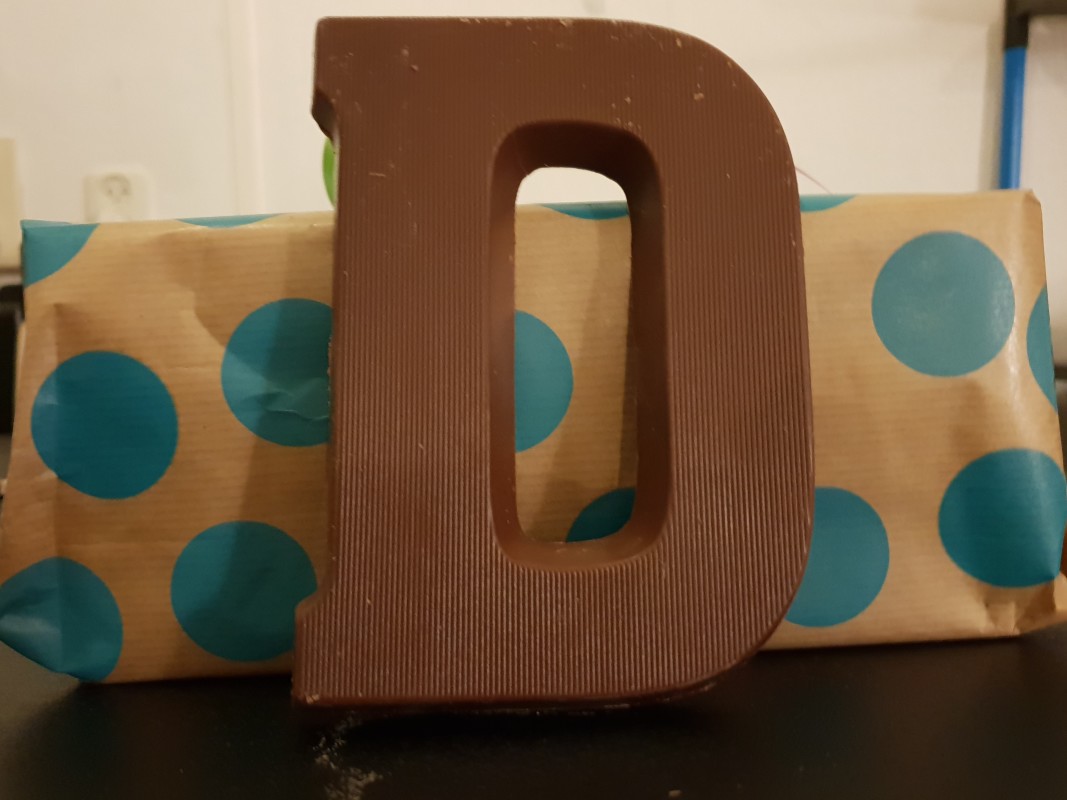 Here is one important thing to realize. It may seem that William (W) and Martin (M) are far more privileged with their names. A W or M of choclate may look much bigger than an I, but if your name is Isabelle or Ivan, don’t worry. All letters weigh the same and have the equal amount of choclate. Remember that Sinterklaas is an honest man and that he treats everyone with love and respect! 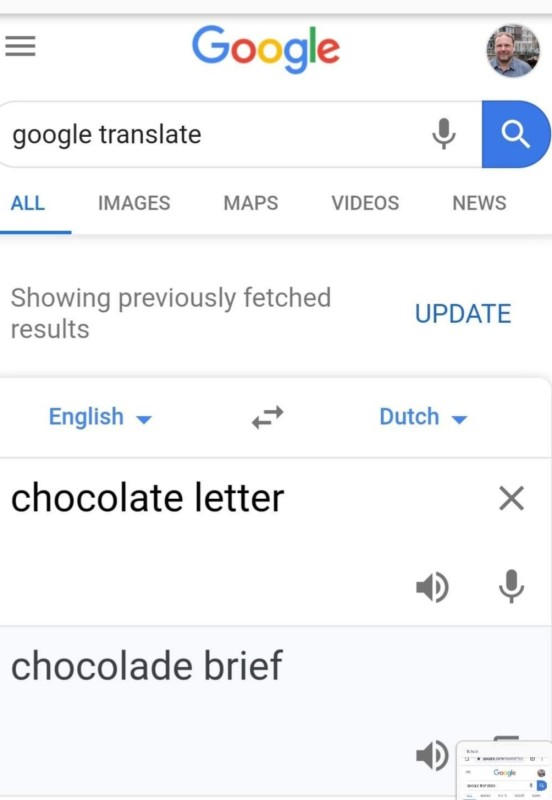 Also, if you use Google Translate in order to communicate with Sinterklaas, be careful! If you translate choclate letter with Google Translate, it will give you the word chocoladebrief in stead of chocoladeletter! In Dutch, letter and brief are two different things. Een letter is an individual letter and brief is something you put in an envelope. If you ask for een brief, then Sinterklaas may assume that you want at least 100 letters and you will certainly come across as to greedy!

5 If you don’t have a chimney, then don’t worry!

As you may know already, Sinterklaas has been visiting Holland for many years now. A long long time ago, his assistants (de pieten) used to climb down the chimney in order to leave some presents for people.

Nowadays, not so many houses have chimneys anymore. It may be hard for you to imagine that Piet could still enter your house, but now it is important that you start to put your faith in the right place. Make sure that you do not leave any door or window open for Piet or Sinterklaas! Somehow they know how to enter your home, they have amazing supernatural powers!

So once again, leave windows and doors closed and simply trust that Sinterklaas can find his way to your home! Remember that you only like to invite Sinterklaas into your home and not thieves!

6 No! Sinterklaas will not give you a cheap holiday to Spain!

Many years ago, Dutch children were told that if you were naughty, one night Piet would enter your house at night, put you in a sack and then you would be deported to Spain. If you were lucky, you would be brought back to Holland only the next year, but chances were high that you would have to spend the rest of your life doing hard labor in a factory for pepernoten or chocoladetters. 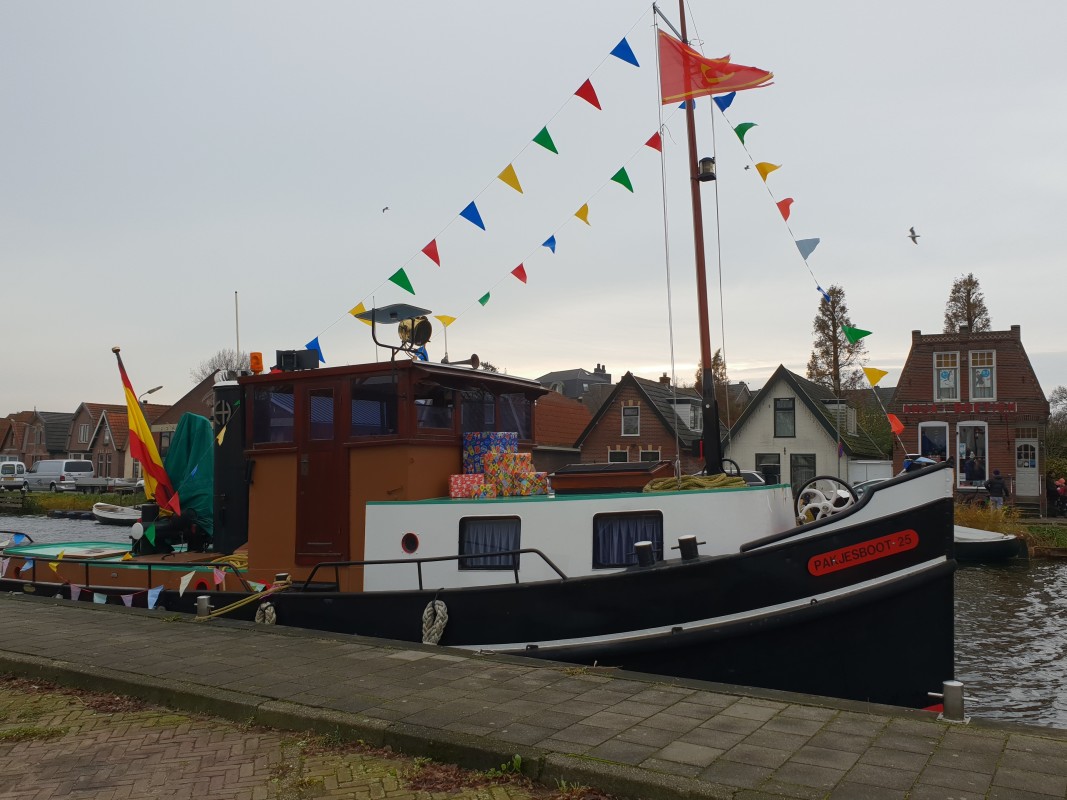 It is always a long way from Spain and from Madrid!

The only problem started to occur when Dutch people began to discover that in Spain the weather is a lot nicer and that actually going to Spain could be a great option! Instead of a punishment, it sounded all of a sudden like a vacation! That is why Sinterklaas has stopped the deportation of people to Spain. He does not want to reward bad behavior!

I must admit that I tried for many years to be as naughty as possible, certainly in that special period in November or December, hoping that one day I would wake up in sunny Spain. But… as you may have guessed, Sinterklaas knows perfectly well how he can punish me. He just leaves me in rainy Holland 🙁

7 Never ever make this joke! It is not funny! 🙁

There is one particular joke that Sinterklaas is tired of hearing every time… jokes about de zak van Sinterklaas! Een zak is a sack of course, and it is something that Sinterklaas uses for transporting presents, chocoladeletters and pepernoten. 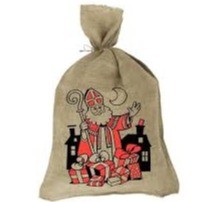 It is not always appropriate to question the origin of de zak van Sinterklaas!

Een zak is also a part of a male body and normally contains two balls. That is why he has heard literally one million jokes some very bad jokes like this: Hé Sint, wat heeft u in uw zak? (What do you have in your sack?) or: Hé Sint maak uw zak maar leeg! (you can empty your sack now)! Although many Dutch people love to tell bad jokes like this, for Sinterklaas it only feels very  embarassing.  These jokes are definitively not amusing for him. First of all, you should not say these things in the presence of children. And..  maybe because of his age,  Sinterklaas is still  a bit conservative in his heart…. It could be a good idea to respect Sinterklaas and leave these stupid jokes aside. Otherwise he may decide not to visit you anymore!

Last but not least

Children love to write a special verlanglijst for Sinterklaas. It literally is a longing list and in English you could call it a wishlist. Whether you believe or not that Sinterklaas will fulfill your wishes and desires, it is always a good idea that once in a while, you write een verlanglijst for yourself. What is something that you would like to have, or what is something that you like to do?

Just listen to heart and feel what you really wish for and what you really desire. Write it down and have a look at it. And who knows? Once you acknowledgde what your real wishes are, magic could happen… 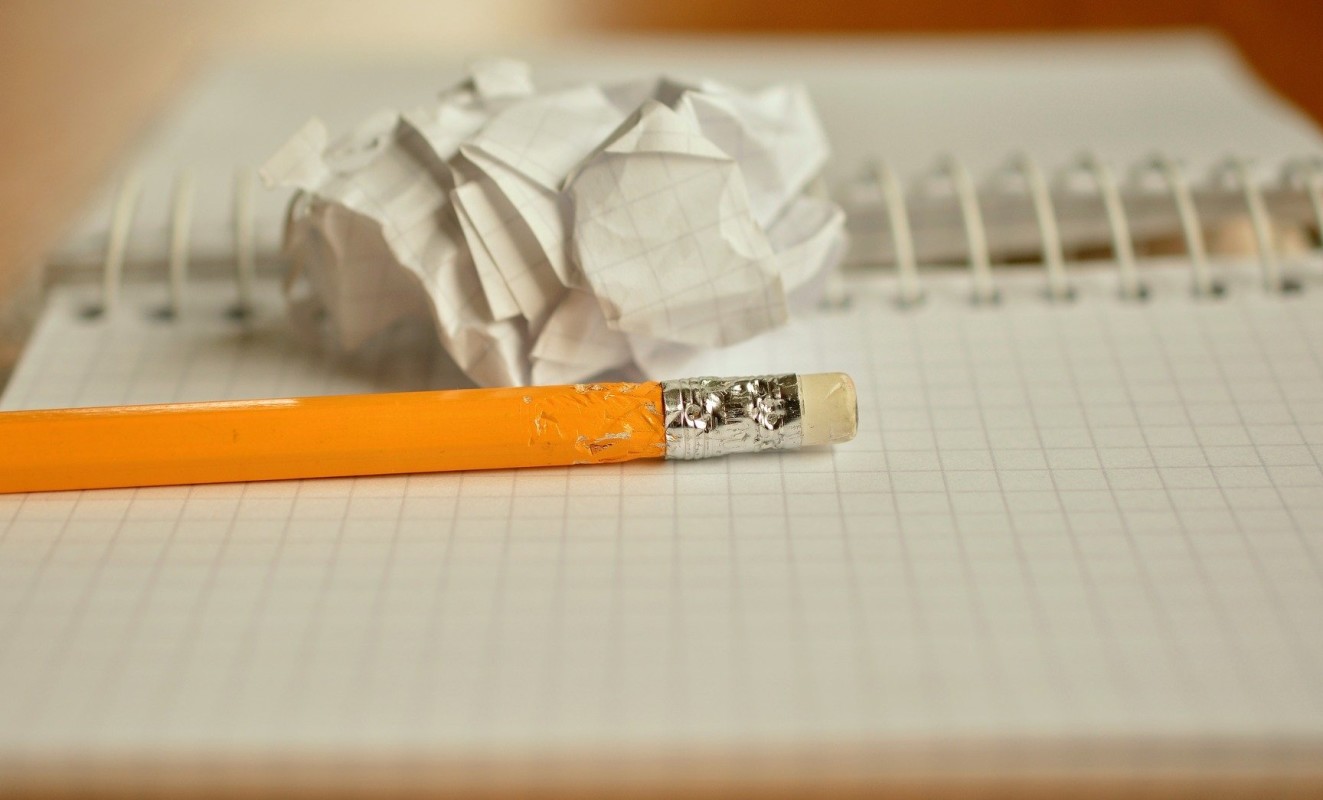 Take some time to write down your wishes! Even if you do not believe in Sinterklaas!

What is something that you would like to put on your verlanglijst? One tip: wereldvrede (world peace) is still in back order, but if you like it, write it down anyway. You never know… Hopefully they will start a delivery soon! And for now… enjoy making een verlangslijst and have fun with Sinterklaas!

Wonderful! Really enjoyed this, some of it I knew, some not. Thank you for presenting it in such a fun way!